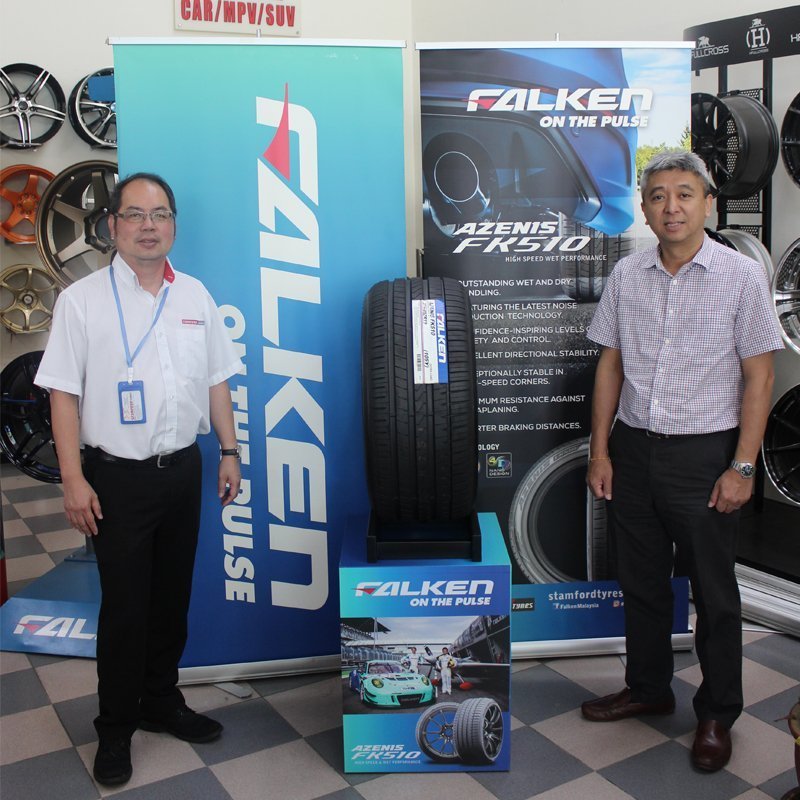 Stamford Tyres Malaysia named Conson Tiu Sia as the new Deputy Chief Executive Officer in February this year. Conson began his career with Stamford Tyres in 1993, heading the Group’s operation in the Philippines. He holds a Bachelor of Science in Commerce from the University of Santo Tomas, Philippines and is a Certified Public Accountant. He was the Group Chief Financial Officer from 2001 to 2013.  Prior to his posting in Malaysia, he was the Senior Vice President, Head of South Africa Operations of the Group, for 6 years.

There was no ‘honeymoon period’ for Conson as he came in during a challenging time. Executive Vice President & Chief Executive Officer Cham Soon Kian would oversee the overall business operations in Malaysia while Conson runs the day-to-day operations to ensure a smooth transition for two years. Conson has been visiting dealers across Malaysia to understand their needs, requirements and challenges, which he said was an effective way of learning the ropes and market.

“Malaysia is a very small market with more than 130 tyre brands and there are always new brands and products coming to compete for market share. It is a free, open and crowded market. My immediate focus would be to continue brand building and enhance our brand value as well as further strengthen our dealers’ relationship and instil confidence,” he said.

Cham added that Falken was still the company’s major brand, which contributed about 70 per cent of its total sales. “Chinese products still have a long way to go. Defining a Chinese brand and developing a brand strategy could be complex. It takes time, money and effort to build a brand. It also requires communication with the dealers and consumers.”

Conson carries with him his experiences not only in Africa, but also Indonesia and India. “Our plan is to continue working closely with our existing dealers. The numbers game is no longer effective today, though it is tempting to think that more dealers could lead to higher sales. The greater focus should be on fostering a long-term relationship with our dealers, and sharing our vision and long-term plans with them. Protecting and helping them to increase their sales and profit margin.”

One of the potential areas that Conson sees is the commercial segment, where he would like to develop further. Apart from truck and bus radial (TBR) tyres, the company would also look into the waste collection and mining industry as well as heavy equipment such as earthmovers.

“These are the segments that are dominated by the Chinese tyres, but we see the potential and demand for good quality tyres. We just brought in the Falken RI 151 295/80R22.5, which is a regional steer/trailer position commercial tyre that is designed to maximise uptime on the road. It incorporates stone drilling prevention features to protect the tyre from casing damage. Better weight distribution is achieved through an all-new tread profile that widens the stance of the tyres, which increases tread life and promotes even wear. In addition, it has a wavy outside shoulder groove that helps to prevent cracking that is typically experienced at the base of the tread, ” Conson added.

Conson also revealed that the company was currently testing the new Falken BI 852 drive axle tyre, which would be released soon after the trials.

The market, according to Cham, was not promising at the moment due to the economic downturn. “Currently, the majority of consumers are not looking so much on performance but affordability. Even the big brands are promoting their second tier brands to capture market share, which I think in the long run would affect their own major brand. Acquisition and consolidation of brands would continue to take place.”

Stamford Tyres announced that its 3Q19 earnings declined by 97.8 per cent to S$20,000, compared to S$953,000 in 3Q18. The operating environment in the tyre business, Cham continued, remained challenging as a result of global oversupply and intense competition. The anti-dumping duty on Chinese tyre imports by the EU and US resulted in Asia, including Malaysia, becoming the dumping ground for these tyres. As such, he said, the Group would continue optimising its product mix, managing operating costs, trimming down inventory and building on its core markets in Southeast Asia.

Cham explained that the company’s pricing was not that competitive compared to the manufacturers as it was the distributor and its products were imported from Indonesia, Thailand and Japan. “Manufacturers have already increased their prices but the domestic market did not make any price adjustment due to the slowdown. We have never experienced such a slowdown before. There is a sharp increase in the sales of second-hand tyres and the overwhelming demand has created a shortage.”

Another challenge, Conson pointed out, was the big hoo-ha earlier on the tyre manufacture date that led to a great impact for the company. “As a tyre distributor, we have to hold inventory to ensure sufficient product supply. From the tyre sidewall, one could tell the date the tyre was manufactured. Based on that information, many consumers believed the tyre to be ‘fresh’. To determine tyre life based on the date of production is unscientific. In fact, tyre experts would tell you that tyres are considered to be ‘new’ and fit for retail up to 5 years from the date of production.”

The consequences, he continued, were that dealers asked for discounts for tyres that were produced 6 months ago due to the pursuit of the most ‘fresh’ tyres from consumers. This changed the normal operation of the tyre industry from the original first-in first-out inventory system to last-in, first-out. It also affected the company’s supply chain and it had to tighten its inventory control and hold as little inventory as possible, which resulted in a tyre shortage in the market.

“What did not come to the consumer’s mind is that many tyres are imported from other countries and it takes 2 to 6 months to be shipped from the factory,” Conson stressed.

Despite all the challenges, Conson said the company would continue its on-going campaign to promote the Falken brand and further increase its awareness. “We need to support them, especially in tough times; thus we would look into ways on how to support them effectively as the dealers wanted to spend more time in their shops looking after their business rather than getting involved in roadshows.”