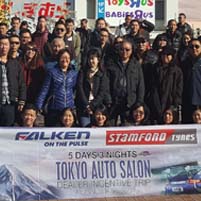 To kick-start the brand new year of 2017 Stamford Tyres Malaysia gave their Falken dealers a 5 Days 3 Nights incentive trip to Tokyo Japan, the highlight of course being the chance to visit the 2017 Tokyo Auto Salon, and to savor the happening sights and marvelous sounds that make the Tokyo Auto Salon hugely popular the world over.

For the 2017 Tokyo Auto Salon, Sumitomo Rubber Industries, Ltd. had its FALKEN Booth set up, with "GROOOOVE – Have your tires got personality?-" as the display theme. The highlights of the Falken TAS booth include among others, an interactive display corner, a display of the FALKEN Motorsports Porsche 991 GT3 R that competed in the Nurburgring 24 Hours 2016, as well as a scale model of Yoshihide Muroya' Falken sponsored race plane.

The STM Falken contingent wasted little time before they started their pre-arranged itinerary which consists of numerous visits to the many places of interest in and around the Greater Tokyo Metropolitan area. Their first destination was the Tsukiji Market, the biggest wholesale fish and seafood market in the world. The following couple of days consist of visits to the many places of interests in and around the vast Tokyo metropolis, including Odaiba Seaside Park, Statue of Liberty, the 18 meters tall 'life-sized' Gundam statue, whilst day 3 saw the Malaysian contingent visiting the renowned Kirin Beer factory.

Day 4 and the time were at hand for their visit to the Tokyo Auto Salon at its prestigious address – the Makuhari Messe International Convention Complex. The STM Falken Dealers received yet another handy benefit: Premium Tickets for the show giving unimpeded viewing of the seemingly endless selection of show cars, aftermarket components, racing kits, and last but by no means the least the lovely Tokyo Auto Salon Show Girls parading in all their glitz and glamour, and always friendly.