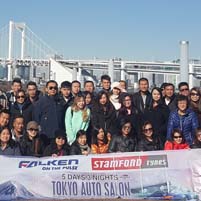 Stamford Malaysia, the sole distributor of Falken tyres in Malaysia, treated its dealers to a 5-day 3-night incentive trip (from 13th to 15th January) to Tokyo, Japan. The visit to the Tokyo Auto Salon 2017 was the highlight of the trip.

Falken showed a strong presence in the exhibition held at Makuhari Messe International Convention Complex in Chiba Prefecture. Themed 'Groooove – Have your tyres got personality', this year's display booth is said to have enhanced Falken image as a youthful and energetic brand while promoting its latest line-up of high performance tyres. Also seen was the display of Falken's updated logo and a new, global tagline; Falken On The Pulse.

The booth highlights included an interactive display corner where visitors could spin featured tyres, such as FK453 and Wildpeak AT, to experience music and video playback regarding each tyre's unique personality. These audiovisual contents were produced by the famous video jockey Heart Bomb. Also on display were the Falken Motorsport Porsche 911 GT3 R that competed in the 2016 Nurburgring 24 Hours Endurance and a full-scale model of the Falken-sponsored Red Bull Air Race plane flown by ace pilot Yoshihide Muroya.

Apart from the Tokyo Auto Salon, the dealers visited many places of interest, including Tsukuji Market, Odaiba Seaside Park, Statue of Liberty, as well as the famous Kirin Beer Factory.