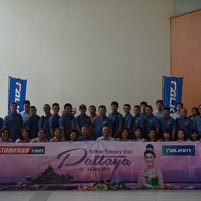 Stamford Tyres (M) SdnBhd, the sole distributor of Falkentyres in Malaysia, successfully organised an incentive trip to Pattaya, Thailand for its dealers from the 10th to 13th July, 2016. The highlight of the trip was the visit to Sumitomo Rubber (Thailand) Co, Ltd in Rayong.

With the aim of strengthening its dealers’ confidence in Falkentyres, the factory visit allowed them to have an understanding of product quality and global manufacturing standards as well as the opportunity to witness the stringent manufacturing processes and quality control implemented by Sumitomo Rubber (Thailand) in producing the Falken brand of tyres.

Located within the Amata City Industrial Estate in Rayong, Sumitomo Rubber (Thailand) is involved in manufacturing and selling radial tyres. With about 60 million square metres to accommodate two factories, it started production in November 2006. Its first plant adopts the concept of the new efficient production system named ‘Taiyo’ or ‘Sun’ to manufacture high-performance radial tyres, while the second factory manufactures tyres for passenger cars, vans and 4WDs through the conventional method.

In response to the growing demand for agricultural tyres, a third plant was set up with production having started in May 2014. The 13 million square metres plant manufactures tyres and rubber crawlers for agricultural vehicles and solid tyres for forklifts.

Since Sumitomo Rubber (Thailand) obtained ISO14001 in 2012, it continued its focus on training and promoting a greater understanding of environment protection among its employees. In 2009, the factory achieved a complete zero waste disposal status.

The general feedback from the dealers confirmed that the factory visit had further strengthened their confidence in the Falken brand as seeing was believing.

Apart from the visit, the dealers also took the opportunity to explore Pattaya’s attractions such as Wihan Sian, a Chinese-style building that presents Chinese antiquities and the art of Chinese religious beliefs; Pattaya Elephants Village, Pattaya Floating Market, among other places.