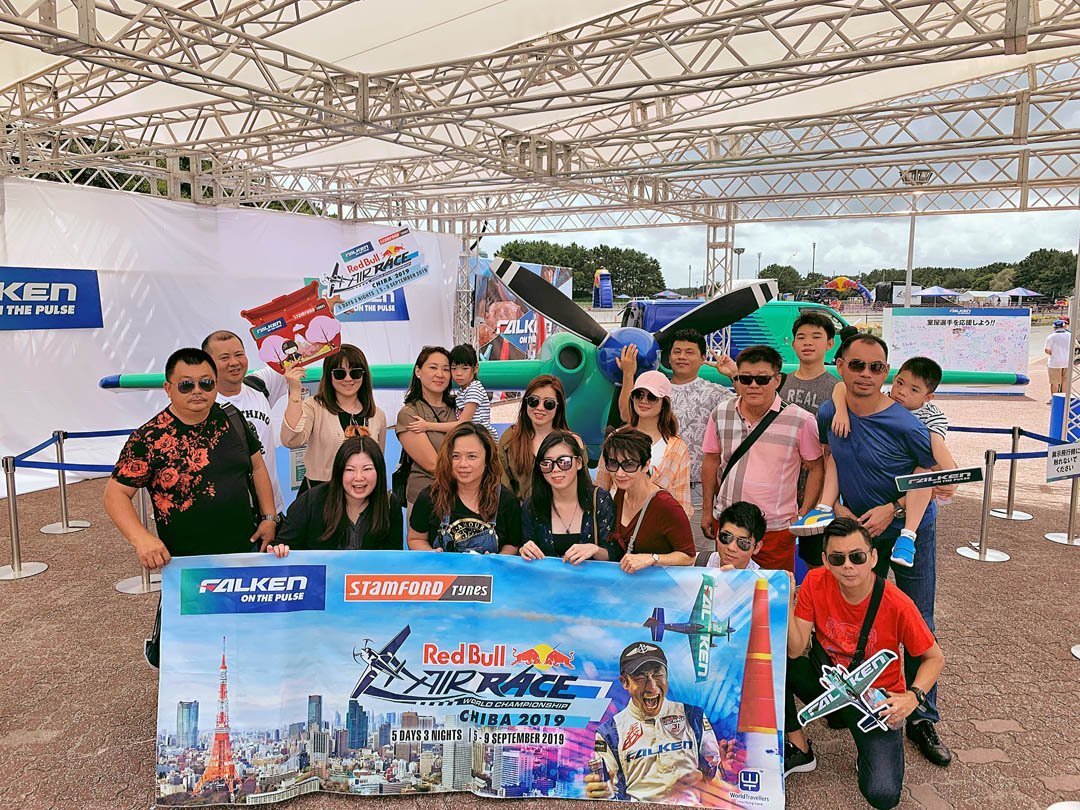 Incentive trips are usually the event that every dealer is eager to attend and being organized by Falken distributor -Stamford Tyres Malaysia, it’s always a memorable and interesting one. The month of September saw a 16 strong team enjoy a 5-day 3-night incentive trip in Tokyo & Chiba, Japan. The incentive trip was held from 5th September to 9th September this year for 17 people culminating 16 dealers and 1 representatives from Stamford Tyres- Mr. Ku Seng Yeow. Kondo San, a representative from Sumitomo Rubber Asia (Tyre) meet and greet the dealers at the Red Bull Air Race Event. The incentive trip saw the group took the chance to attend the Red Bull Air Race Chiba 2019 to support Team Falken who took part in the race.

The first day saw the group took a 7 hours flight from Kuala Lumpur to Tokyo and they were greeted by the local tour guide once they arrived at the Narita International Airport. The local tour guide brought everyone to have their first dinner in Tokyo before ending the night at a luxurious 4-star hotel, Hotel Metropolitan Tokyo Ikebukuro.

The second day saw everyone start early as they have their breakfast at the hotel before being transferred to Kawagoe which its main street lined with Kurazukuri buildings and Kawagoe became known as “Little Edo”. Everyone had a wonderful time taking lots of beautiful pictures at the Kawagoe area, Kawagoe’s Warehouse District, Candy Alley and not to forget is the Kawagoe’s Kitain Temple. After a long day of photoshoot and seeing all the beauty that Kawagoe can offer, the participants are transferred back to Tokyo to have their dinner and then back to Tokyo Metropolitan Hotel.

Yesterday it was about seeing the beautiful street and buildings, day three took a different approach. After a good hearty breakfast, all the participants took a 55km ride to Kisarazu and they had a chance to drive through the famous Umihotaru which is an artificial island that serves as the mid-point on the Aqua Line and being surrounded by the sea, this rest stop features restaurant, shops, views of the bay and other facilities. The day gets better as the local tour guide took the participants to visit Mount Nokogiriyama which is a 330-meter tall mountain along the western coast of Boso Peninsula. Along the slopes of the mountains is Nihonji Temple, a Soto Zen Buddhist Temple which was commissioned about 1300 years ago making it one of the oldest places to worship in the Kanto Region. After having a good lunch it is finally time to shop till they drop at the Kisarazu Mitsui Outlet.

Given all the traveling and sightseeing done for the first three days, day 4 is probably the most exciting day for everyone on this trip as they are about to attend the Red Bull Air Race Chiba 2019. However, there were sad vibes as they have to check out and bid farewell to the Tokyo Metropolitan Hotel but everyone soon gains their mood back when the arrive at Chiba. A photoshoot session was held at the Chiba Shrine and Chiba Castle before moving to the Red Bull Air Race.

The Red Bull Air Race World Championship is an aerial motorsport series that demands a combination of speed, precision, and skill. Using the fastest, most agile, high-performance race planes, pilots compete in iconic locations over water and land. The high speed, low altitude, and extreme maneuvering required making it only accessible to the world’s most exceptional pilots. 14 Master Class pilots race against the clock whilst reaching speeds of up to 370 km/h, requiring a combination of precision and skill unmatched in the world of aviation. Pilots must be in peak physical condition as they endure forces up to 12G while navigating the technical racetracks made up of air-filled pylons. The Air Race was developed in 2003 and is accredited by the Fédération Aéronautique Internationale (FAI), with more than 90 races completed across five continents. As the most advanced aerial challenge in existence, competing in the Red Bull Air Race World Championship is the highest accolade for elite

Sumitomo Rubber Industries, Ltd. is proud to announce their sponsorship, as an official partner through FALKEN Brand for the “Red Bull Air Race Chiba 2019” which was held at 7-8 September at Makuhari Seaside Park. There is a FALKEN Booth on display at the venue, featuring demo cars outfitted with their latest lineup of high-performance FALKEN tires, as well as a model of the Team FALKEN race place flown by Yoshihide Muroya which is the only pilot from Asia competing in the Master Class in this year’s tournament.

The CEO of Sumitomo Rubber Industries, Ltd., Satoru Yamamoto is proud to announce that Team FALKEN’s Yoshihide Muroya claimed his third victory of the season in the fourth and final race of the Red Bull Air Race World Championship 2019 which was held in Chiba. Through the FALKEN brand, the Sumitomo Rubber Group has been proud to sponsor the remarkable pilot as he competed in the Master Class for this year’s season soaring to second place in the overall ranking for the season.

Yoshihide Muroya is the only pilot from Asia competing in the Master Class in the Red Bull Air Race World Championship. He demonstrates fantastic high-speed, high-precision flying skills in the Final 4 round to capture the victory in the Chiba Race, making him the runner-up of this year’s season. FALKEN brand is widely renowned for its high-performance tires developed using the latest technologies and further refined through our active participation in competitive motorsports meanwhile Yoshihide Muroya is an outstanding pilot whose hard-won skills have taken him to competitions around the world and recognizing the strong compatibility between him and FALKEN’s own brand image, the Sumitomo Rubber Group has been proud to support Mr. Muroya for the past five consecutive years.

As with all beautiful holidays, the trip ended way too soon but everyone headed back to the airport with pride knowing that the FALKEN sponsored pilot just took home first place in the Red Bull Air Chiba 2019. The participants boarded the plane and left Japan with tons of experience and valuable memories.