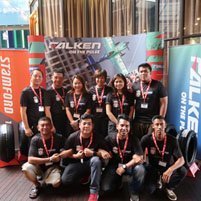 With the way things are going for Liverpool particularly their brilliant Champions League display, in which they're currently on the verge of reaching the final for the first time since that sensational come from behind win in the 2004-05 Champions League. Now it seems that every football lovers not the least the passionate Kopites themselves, gets excited whenever Liverpool FC play.

Falken Malaysia recently held a live viewing party of the game they played against Stoke City on April 28 at Score the Roof Sky Level 1 First Avenue Bandar Utama. It comes after the earlier live screening of the Liverpool versus Spurs back in early February. Of course the current wave of expectation as the Champions League final beckons for the hugely popular club, prompted quite a turnout for the party for the Falken Tyres Malaysia hosted 'Live Viewing party' most of them clad in their favorite Liverpool jerseys.

Registration opened right at 5:30pm – some two hours before the scheduled kickoff although, just as before the enthusiastic Liverpool fans were already there at the designated venue even before then. Indeed the venue itself is the perfect choice for the occasion. Touted as 'the ultimate for sports enthusiast' Score at the Roof is one of the more popular hangout for the more discerning sports fans.

Welcoming the lively and excited fans were a number of top execs from Stamford Tyres Malaysia and the warm and happening party atmosphere began in earnest as complimentary beverages were handed out soon as they were registered. Also free alcoholic drinks were given for those who had their favorite football jerseys on.

During the live viewing party, the guests received limited Falken merchandise by simply posing in the most creative way with Falken products or brands (standee/flag/decoration) and post it up on Facebook with hashtags #FalkenMalaysia #FalkenLFC2018.

And again just as it was, there was a grand prize of a set of 15 inch  Falken tyres worth RM800 for the guess the final score contest.