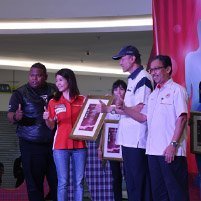 The rising number street crimes particularly against women have become a major cause of concern. Numerous awareness campaigns that revolve around this most critical of issue have been organized by many organizations from all walks of life encompassing the multi cultural ethnicity of our country.

One such campaign is the Women Street Crime Awareness Campaign – a workshop organized by the Road Safety Marshal Club Malaysia which saw a high profile participation of Stamford Tyres Malaysia – one of the biggest name in the local automobile scene.

The event was held on January 7th at the Summit in USJ Subang Jaya, and witnessed quite a turnout of Malaysians, be it non-profit organizations from the private sectors, social clubs as well as concerned citizens from all over the surrounding area as well as Klang Valley.

The event which began at 10 o'clock in the Saturday morning and went on until 6 o'clock that same evening featured a number of highly welcomed workshops and demonstrations. The participants of the workshop were able to join various activities such as snatch survival skills, practical pepper spray usage, demonstration on child anti-lost tracking device, self-triage and many more.

There were also practical sessions on how to use pepper spray, basic know-how on cardiopulmonary resuscitation (CPR), how to avoid acid splash, how to avoid being a victim of street crimes and more.