STM rolls out the red carpet for Falken Tyres VIPs 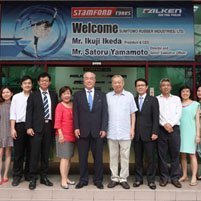 After a memorable trip to Thailand with dealers in August, Stamford Tyres Malaysia (STM) stepped up its efforts yet again as it hosted several visiting VIPs from Sumitomo Rubber Industries Ltd, the parent company of Falken Tyres, who were on a two-day working visit to Malaysia last month.

Making their way from Japan here were its president Mr Ikuji Ikeda and director and senior executive officer Mr Satoru Yamamoto. Hosting them were executives from both the Sumitomo Rubber Asia (Tyre) Pte. Ltd. (SRAT) regional division from Singapore and STM.

The visiting VIPs started their Malaysian tour on Sept 17 with a welcome dinner with dealers organised especially by STM at the Kingdom Palace Seafood Restaurant, Petaling Jaya. The evening soiree saw both Mr Ikeda and Mr Yamamoto receiving a warm welcome from the 130 guests present. Celebration was also in order for the evening with  cakes rolled out to mark the 47th wedding anniversary of Mr and Mrs Wee, and the birthday of Datin Anne Leong.

Day 2 saw Mr Ikeda and Mr Yamamoto visiting the premises of STM's leading Falken dealers Kam Hua and Speedline. In between visits, STM also managed to host both visiting VIPs to bak kut teh lunch. This was followed by meetings with STM management at its business headquarters before the VIPs were taken on a brief tour of STM's warehouse facility. The visit by the VIPs from Sumitomo Rubber Industries Ltd was hailed as a success.