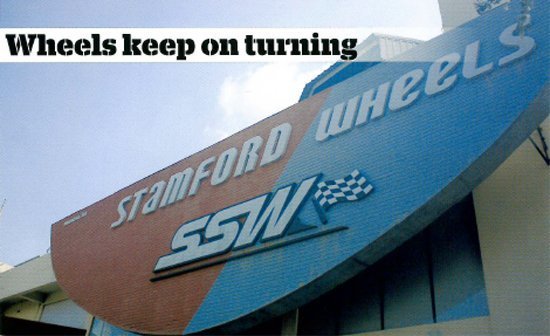 YOU DON'T NEED TO WORK AS A MOTORING journalist long before you are whisked off to some factory to see cars being built. The factory tours usually give a brief telling on how the automobile is assembled, from frame to a full-working product. So we get to see the various stages of the car, how it is put together, how much of testing is done to make sure it meet quality standards and how it is finished before it is presented in the showrooms. Quite enlightening this behind-the-scene stuff.

However, it is actually rare to see how a wheel is made. I'm talking about the steel circles that the rubbers wrap around. It is an important part of your car for without it, your tyres cannot be inflated and have the strength to hold up the entire car. You may not think much about it until you want to give you car a make-over.

Out of the box, the OEM wheels work as well as they should. It is just that the sheer numbers of wheels shoed to your particular vehicle brand makes your car seem one with the masses. Like a drone.

So the first step of personalisation for your car is to change your wheels. Now, there are plenty of aftermarket wheels out there; many brands with equally many designs – some promising more than others. You may desire one particular design of wheel but ultimately, it is the price that dictates your choice. Remember, you get what you pay for.

And then, there is SSW Performance Wheels that wants to give you the quality and look of a premium aftermarket wheel without the high price.

Which is why I find myself 60km north of the bustling Bangkok; about an hour and a half's drive from the capital. The area is called Nonthaburi where the lands are flat and littered with green fields and manufactories.

The factory where the SSW wheels are made is massive; it covers 19,800 square metres of land out of the total 30,000 that SSW occupies. The factory has the capacity to produce 900,000 pieces of aftermarket wheels each year.

As with everything in this world, it starts at the drawing board. There are two teams of designers that pen the patterns on the wheels. A mould is made for the design and is casted using melted ingots. Once that is done, it is carted off into the lab where it will be subjected to impact tests.

Here, the wheels are tilted at an angle of 13-degrees, 30-degrees or 90-degrees that will be followed by the dropping heavy weights onto the highest point of the tilted wheel. The weights weigh from 639kg to one tonne. The tilt angle and the weights dropped are dependent on the type of wheel and its application.

Once everything is hunky-dory with the wheels, it gets made for the masses.

Now, the factory floor is properly hot. It is not just the machines that are giving out the sweltering heat but there is also a furnace that is used to melt the ingots sourced from Dubai and Australia. The molten metal is then poured into vats before being mixed with some sort of powdery substance, and every hour a sample is taken into the quality control lab for testing to make sure that the wheels meet to proper standards.

It needs to be mentioned here that SSW does take the quality of its products very seriously. The samples are tested for its density, tensile strength and composition according to the standards set by the Japanese JWL. Incidentally, SSW also has gained certification from Germany. Russia and Turkey.

My perspiration is now soaked into the fibres of my shirt, and I've just begun the tour. On bon sides of me are two machines that cast the wheels – one is capable of producing a hellish 530-degree Celsius and the other 170-decrees. So by saying that the wheels are forged in fire is not far from the truth. But it needs to be this hot so that it the molten metal flows well into every spoke in the cast without trapping pockets of air during formation.

Every single one of the wheels that comes off the line is checked to see – and I am serious here – how round it is, the balance of the wheel and if it has hidden air pockets that will compromise the integrity of the wheel. Fail any of that and the wheel is discarded. Told you SSW takes quality very seriously.

Only good wheels are moved down the line to be buffed, washed and painted The painted wheels are checked for its thickness, adhesion, corrosion before ins polished. After that the wheels are checked visually to see if it looks good Then it is packing, storing and then shipped to the destination. 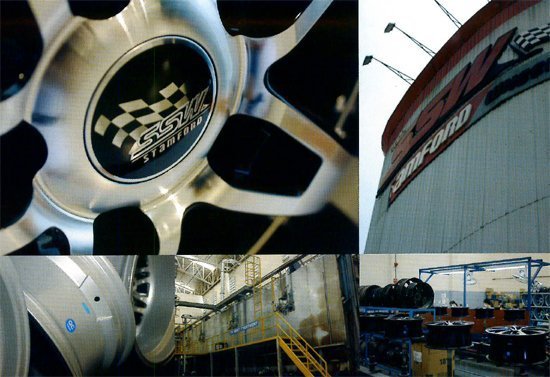 Unless it is SSW's range of chrome wheels. The chroming technology is from Taiwan, with Taiwanese engineers managing the station. The room in which the chroming takes place is a complete opposite to the pressure cooker outside – it is cold in here. The room is not big in any sense, just enough to fit two sets of racks that holds 20 wheels and a vacuum chamber.

How SSW chromes its wheels, as opposed to the conventional spray-on, is through a vacuum and electrolysis. Still remember your Chemistry? The process is called Plasma High Vacuum Coating Technology; a lengthy name and to actually detail the process takes just as long.

To put it into an easy nutshell, the process of electrolysis is used to bond the chroming substance and the metal of the wheel so that both will have a permanent bonding. And it is done in a vacuum chamber to eliminate any contamination.

I may have simplified things here a little but this is essentially how the wheels are made – from the perspective of SSW of course. What iriipresses me most is how every wheel you see on SSW's rack has gone through so much torture just to give your car a good looking set of wheels without sacrificing your safety.

SSW may still be relatively young, but it has what it takes to stand toe-to-toe with the big guns.